Prosecco and Champagne are sparkling wines from Europe that are sometimes confused with each other. However, Champagne is French, and Prosecco is their Italian neighbor, and that’s the least of their differences. They have different flavors, brewing methods, and prices. Both wines make the signature “pop!” when opened, though, so they can be substituted for one another if the goal is to set the mood of a celebration.

Prosecco is far from cheap Champagne. It’s a sparkling wine that holds its own and has been beloved by the citizens of Italy for centuries. Although it is more affordable, it has a totally different flavor profile because it’s made from different grapes. It also doesn’t meet the strict requirements France demands of Champagne. One of those requirements is that the grapes must be from the Champagne region of France, where Prosecco grapes aren’t grown. 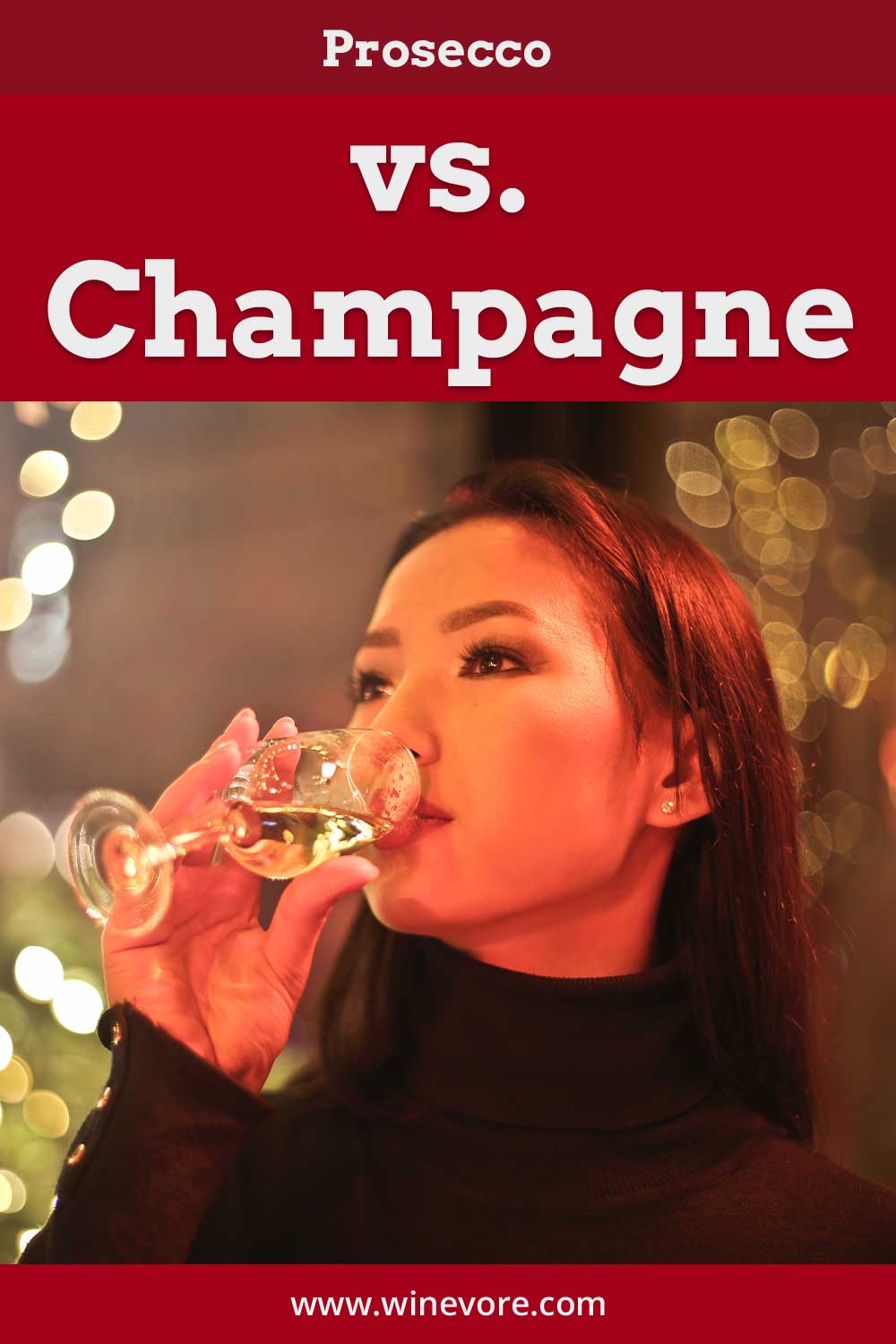 Do Champagne and prosecco taste the same?

No, Champagne and Prosecco don’t taste the same. They’re made from very different grape varieties. Champagne has notes of citrus, white peach, cherry, and almonds. Prosecco leans toward green apples, honeydew, pears, and floral notes. Champagne also has a different fermentation process that adds complexity but can also give it a yeasty flavor.

What Is Similar About Prosecco And Champagne?

Champagne and Prosecco are white wines originating from the Old World. Most Prosecco doesn’t age well, although this isn’t true for all sparkling wines. The average Prosecco is best consumed very young, usually about a few months to a year after it’s produced. Some top-quality Proseccos can be aged for up to seven years. But in general, Prosecco makes it to a shop quicker than Champagne.

Both Prosecco and Champagne can be made as a Rosé. Some Rosé Champagnes are real Champagnes made in France. But most often, they are made in California. These only sport the title of Champagne because the company was grandfathered into using the term “Champagne” after the United States agreed to France’s rules.

What Is The Difference Between Prosecco vs. Champagne?

Both Prosecco and Champagne are sparkling wines, but the former hails from Italy, and the second originates from France. Prosecco is also more affordable because Champagne is often regarded as a luxury good. In contrast, Prosecco can be of equal or greater quality but doesn’t have quite the same public perception. In addition, Champagne has stricter requirements on how the grapes must be grown, harvested, and fermented. These restrictions increase the cost of production.

Prosecco is made from Prosecco grapes, also known as Glera grapes, but up to 15 percent of the wine can be from other grape varieties. Champagne is a blend of grape varieties, including Chardonnay, Pinot Noir, and Pinot Meunier. Arbane, Pinot Gris, Pinot Blanc, and Petit Meslier are also permitted according to French law. But they’re rarely used in significant amounts. Many of these grapes are used to make red wine, but excluding the skins in the fermentation process allows Champagne to remain a golden color.

Is Prosecco sweeter or dryer than Champagne?

The most common Champagne and Prosecco wines are dry or “brut.” But they’re both available in a range of sweetness. In the 1800s and 1900s, Champagne was sweeter and largely considered a dessert wine, not a beverage consumed with the meal. The average Champagne today is drier, and there’s less fuss around when it should be drunk.

Prosecco doesn’t usually have less than 10 percent ABV but averages about 12 percent. Champagne is largely the same. There’s no clear winner here. If you picked up random bottles to compare, their percentages would vary by 1 to 3 percent at most. The lack of variation in this regard can be attributed to Champagne and Prosecco having stricter rules regarding production than most wines.

Can you substitute Champagne for Prosecco?

If you’re only concerned about having a sparkling wine to enjoy with a meal or pop open for a celebration, then Champagne can be substituted for Prosecco. But the taste will be quite different and noticeable to anyone who normally drinks Champagne. This isn’t a bad thing; Prosecco is a great wine, and it’s certainly not less than Champagne.

How Do I Choose Between Prosecco And Champagne?

Anyone on a budget should consider Prosecco over Champagne, which is widely available for anywhere from $5 to $20. Champagne is a little pricier at $30 to $60 unless it’s made in California, in which case it can be found for about $10.

The flavors are different, but it’s not something you can easily choose between unless you’ve tried them before. Other than that, they have about the same amount of alcohol.

Despite both being white sparkling wines with around the same alcohol content, Prosecco and Champagne have more differences than similarities. They’re from different countries, have different production methods, and are made from entirely different grapes, so their flavors are not much alike. They also have drastically different price points. But neither is necessarily better than the other in any regard.