What Is Similar About Merlot and Cabernet Sauvignon?

These wines were first produced in the same region of France. They are still massively popular there, with hundreds of thousands of acres dedicated to growing their grapes. The wines are incredibly different in flavor, but their percentage of alcohol is about the same, along with their dryness. They are also popular wines to use in wine blends because their flavors compliment others.

Merlot and Cabernet Sauvignon are some of the best wines to age in oak. Aging these wines in oak intensifies their flavors and adds complexity. Both wines can take on flavors like vanilla, butter, toffee, and tea when aged in oak barrels. 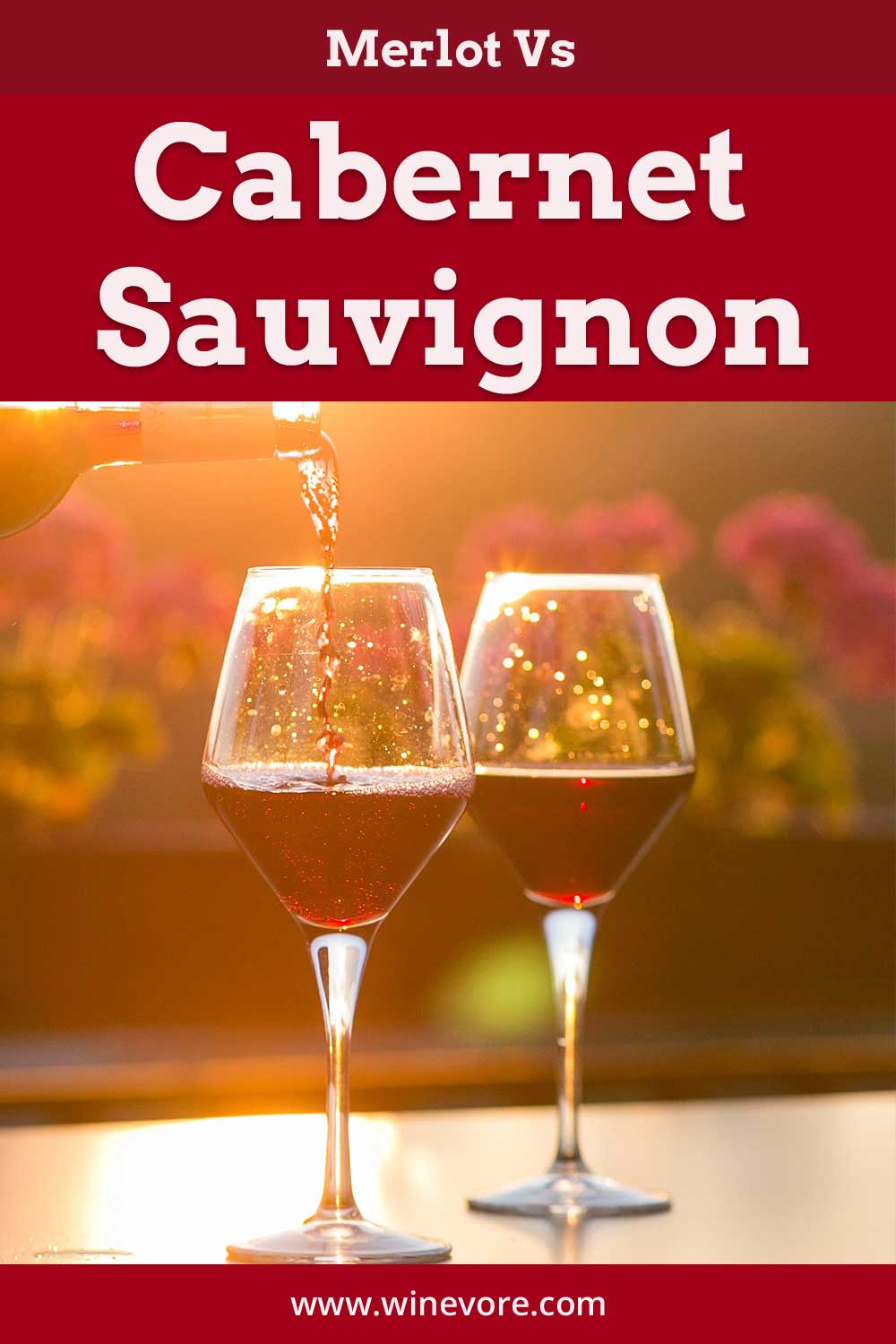 What Is The Difference Between Merlot Vs. Cabernet Sauvignon?

Cabernet Sauvignon is full, rich, and robust. Merlot is a more delicate red wine. While they’re both dry wines, Merlot can taste sweeter because of its flavor profile. It’s a very fruity wine with a smooth finish, whereas Cabernet Sauvignon is more savory and has a long finish.

Merlot is usually a less expensive choice than Cabernet Sauvignon and, in general, not as widely respected. But that doesn’t mean Merlot is any less delicious than Cabernet. All wines have some differences–sometimes big, sometimes small–when grown in different regions of the world. But Merlot, in particular, has a traditional style and an international style. The traditional style is more acidic, with a lower level of tannins and less alcohol. In addition, it’s more of a medium-bodied wine than the international style, which is medium to full-bodied.

Both are French wines, but the first mention of Merlot was around the late 1700s, and Cabernet is a little older, with our records dating it back to the 1600s.

Cabernet Sauvignon and Merlot are fairly close in dryness, with Merlot sometimes ending up a little sweeter. Neither is considered a sweet wine. Wines with more alcohol tend to have a richer, bolder taste and taste less sweet.

Cabernet is a great wine to drink alone. However, Merlot is best paired with food, and in this case, you can pair it with something to emphasize its sweetness, like caramelized veggies.

How Do I Choose Between Merlot and Cabernet Sauvignon?

To choose between Merlot and Cabernet Sauvignon, consider the following:

Cabernet Sauvignon has a peppery flavor, along with black currant. Overall, it’s a very savory wine that is higher than average in tannins, which emphasizes its dryness.

Merlot has a fruity flavor profile with plum and cherry flavors. It’s lower in tannins with a smooth finish.

Cabernet Sauvignon has more commercial success than Merlot. As a result, it has a better reputation and is often a more expensive wine.

Merlot is an affordable option.

Although you can’t go wrong with either wine, Merlot is the underdog when compared to Cabernet Sauvignon but holds its own amongst all red wines. Merlot has a little less alcohol, but it does have a fruitier, smoother profile, which might appeal to people who aren’t fond of bold wines.