Decanting a white wine is rather easy compared to decanting red wine. This is mainly because white wines, in general, have significantly less – if any – sediment build-up than a red wine has. White wines create more tartrate crystals than sediments. These aren’t harmful. However, they leave an unpleasant taste and texture. Decanting a white wine will separate these elements from the wine, leaving you with a more enjoyable white wine.

Tartrate crystals, or as some refer to them, ”white diamonds”, are formed by tartrate acids that are present in wine grapes. The crystals form when the wine is chilled. The acids will separate from the wine and fail to dissolve again. Therefore, some wine curators will chill the wine to create and separate these crystals before bottling and selling the wine. On another note, these crystals are also used as the same ingredients that are used to make cream of tartar. These crystals are mostly harvested from wine barrels. 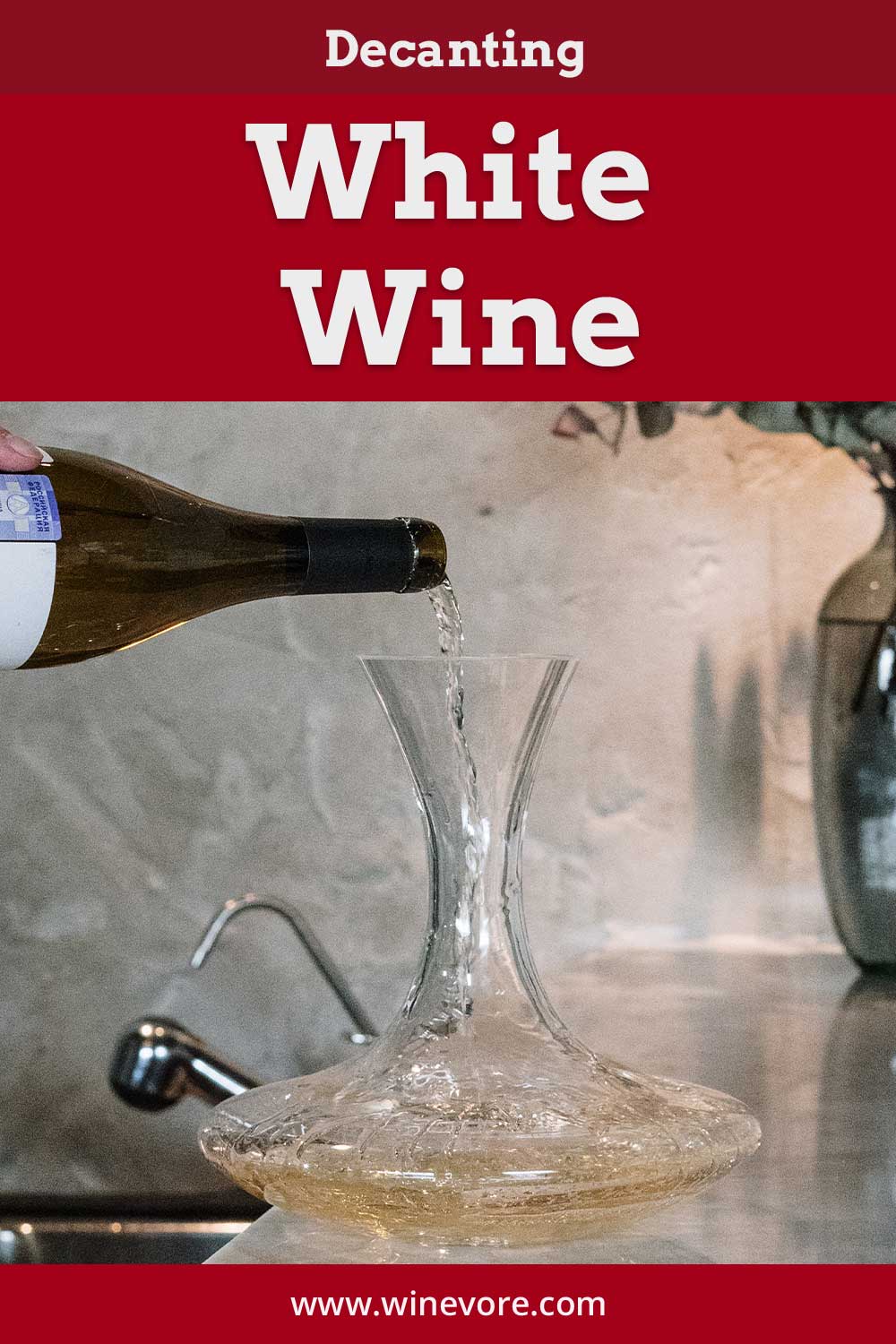 Can you decant white wine?

Yes, you can decant a white wine – but you’ll have to determine if your wine of choice needs to be decanted. Most white wines don’t need to be decanted, but if it’s an older wine with visible sediment build-up and tartrate crystals, you can absolutely decant it!

Do white wines need to breathe?

It is not required to aerate any wine, but generally speaking, only specific white wines will benefit from the breathing process. This is due to the fact that white wines such as white Bordeaux, Charlemagne, Alsace, and burgundies are all dry and heavy. Full-bodied wines like these will highly benefit from aeration. Allowing them to breathe will allow them to present more pleasant aromas and flavors.

In conclusion, white and/or sparkling wines are less likely to need to be put through an aeration process. However, if you sense any signs such as sediments, tartrate crystals, unpleasant aroma, and taste, these wines can indeed be aerated briefly for about 15 minutes in your decanter. Remember, when you decant and aerate these wines, it’s important to maintain the temperature, for white wines are more sensitive to warmth.

Is it worth decanting white wines?

If you are willing to put in the time and effort into decanting, aerating, and keeping the white wine chilled, it might indeed be worth the while. The factors, however, strongly depend on the type, age, and status of quality. Older, white wines with visible sediment build-up are the only white wines that need to be decanted. It’sIt’s important to note that any young wine, or any wine that you typically purchase from your supermarket – is indeed not worth decanting and will not benefit from the process at all.

Can I damage white wine if I decant it?

Although older wines will benefit from decanting, white wines will be damaged if they are decanted too much. What we mean by this is that the following could cause damage:

Smaller decanters are better for white wine because it prevents over aerating the white wine. They also assist in maintaining a good temperature more than a larger decanter would. Also, note that decanters with airtight stoppers will also hold your wine better than one without. When your white wine is ”damaged” all notes could be affected. This includes flavor, aroma, and even texture.

If your older white wine has tartrate crystals or any sediment build-up, it would be necessary to decant. While decanting a white wine, it’s important to remember to chill the decanter and the wine. This is because white wines are more fragile when it comes to temperature. Aerating white wines can be a little tricky. There are only certain wines that do need to be aerated. However, when you do have a wine that you need to aerate – leaving it for 5-15 minutes in the decanter before serving should be just the right amount of time. White wines are worth decanting. It greatly depends on factors such as age, type, and status of quality. You can damage white wine if you decant it. It’s important to make sure you’re not double decanting your white wines either. It could damage its quality leaving aroma and, more importantly, taste – unpleasant.