Barbera and Cabernet Sauvignon are dry red wines with about the same amount of alcohol. Barbera is from Italy and is low in tannins but high in acidity. Cabernet Sauvignon is a French wine with the opposite profile, having plenty of tannins but less acidity. These wines can look similar to one another, but their difference in taste and mouthfeel is noticeable.

What Is Similar About Barbera and Cabernet Sauvignon?

Barbera and Cabernet Sauvignon are both red and dry, and they’re from neighboring countries. They’re both noticeably acidic.

Barbera grapes are the most grown grapes in Italy, and Italian vineyards in the Piedmont area alone hold about 60% of the world’s Barbera grapes. Cabernet Sauvignon also enjoys a great deal of popularity.

Red wines are best served chilled, but they’re easier to drink at room temperature than white wines. It will be more alcohol forward than if you had chilled it. Italian red wines should also be decanted, which means allowing the wine to air out for a bit before drinking. 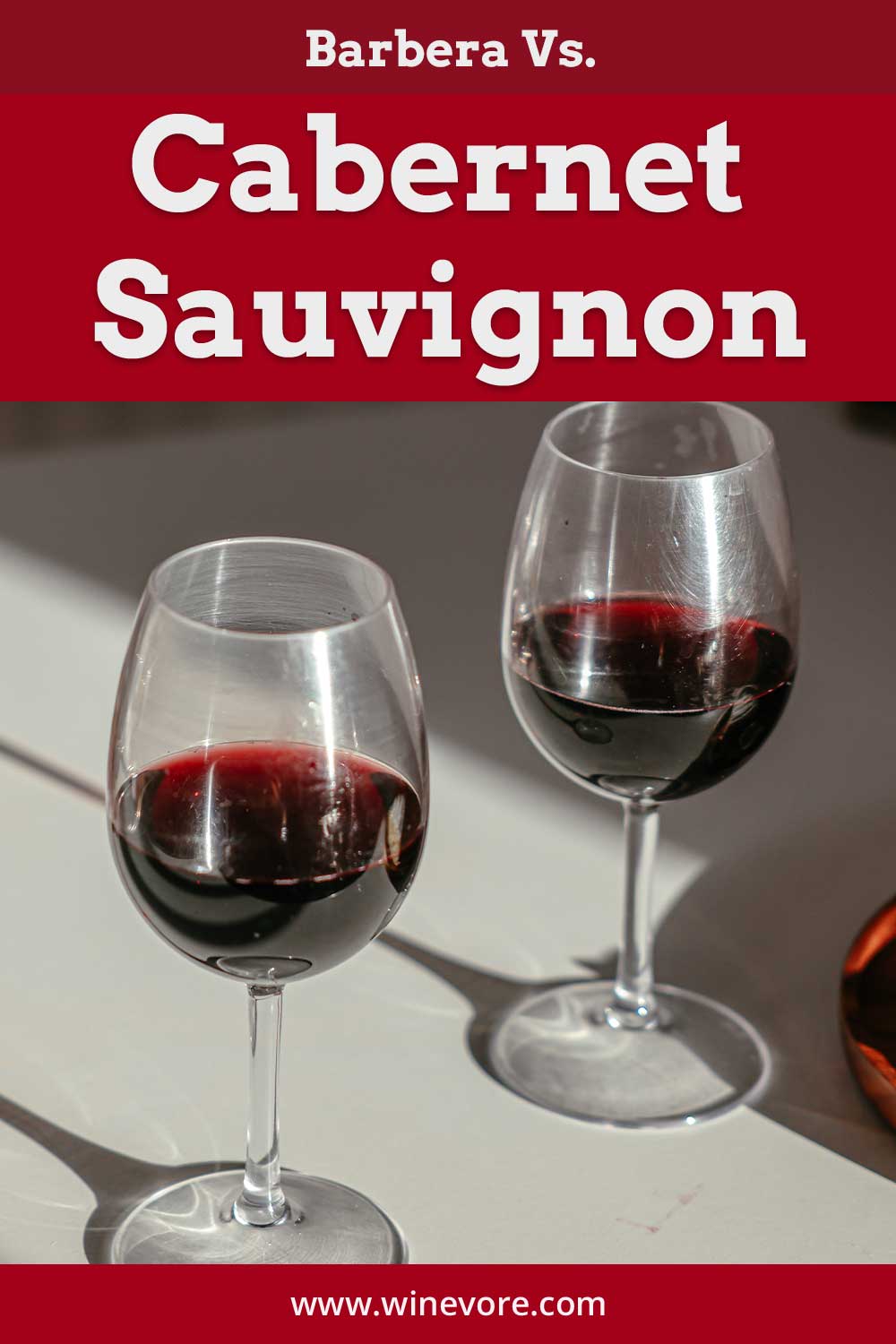 What Is The Difference Between Barbera Vs. Cabernet Sauvignon?

Barbera is a much older wine than Cabernet Sauvignon, with some researchers believing it to be about 1,000 years older. It pairs well with rich foods like mushrooms, meatloaf, steak, and of course, cheese. This wine tastes like red fruits, so think cherries, strawberries, and raspberries.

Cabernet Sauvignon tastes like vegetables and spices. More specifically, you might recognize the flavors of bell pepper, asparagus, black pepper, and mint. If its grapes are grown in a very hot climate, the wine tastes a little sweeter and a bit like jam. It pairs well with any red meat, tuna, and most tomato-based Italian dishes. Because it pairs well with tomato sauces in general, it can also go well with pizza.

Barbera has had ups and downs in popularity in the United States, but Cabernet Sauvignon has been a consistent favorite since it arrived. Of course, Barbera is hugely popular in Italy, where it is from.

When comparing the sweetness of red wines, it helps to consider other factors like if the wines are high in tannins. Tannins affect your perception of taste because they emphasize a wine’s dryness. Cabernet Sauvignon is usually higher in tannins than Barbera. So even when they have the same amount of residual sugar, Barbera tastes sweeter.

Barbera and Sauvignon are quite close in alcohol content, usually having about 11.5 to 14.5 ABV. Remember that alcohol also affects your perception of taste. In addition, sometimes, a high alcohol wine has a burn that makes it more difficult to identify the wine’s flavor. Many red wines are big and bold, so this isn’t a problem.

How Do I Choose Between Barbera and Cabernet Sauvignon?